Mobile platforms and their operating systems have proliferated in both public and private sectors. The Windows OS has even taken a back seat to their numbers. In turn, nefarious forces are targeting these mobile platforms to take advantage of potential vulnerabilities.

Before you begin you need:

Enroll your device in TestDrive's Workspace ONE UEM environment.  For device enrollment details, click the appropriate header below:

On your device, go to the Intelligent Hub > Self-Service area.  Self-Service is where you can view various device status, and perform certain functions, for all of your enrolled or registered devices.

In Self-Service > My Devices, your enrolled or registered devices will be listed with an overall status.

If you have multiple devices listed, choose the device labeled "current" to view its device details, where Mobile Threat Defense status is displayed.

Drill into the Mobile Threat Defense section for more details.

Since the device is safe, UEM provisions the device with all assigned apps and profiles. In turn, the device will be permitted to access corporate resources through its UEM-managed VPN connection(s).

Next, log in to TestDrive's Workspace ONE User Portal.

When logged in to Workspace ONE UEM, first verify you're using your Device Administrator and World Wide Enterprises admin role. 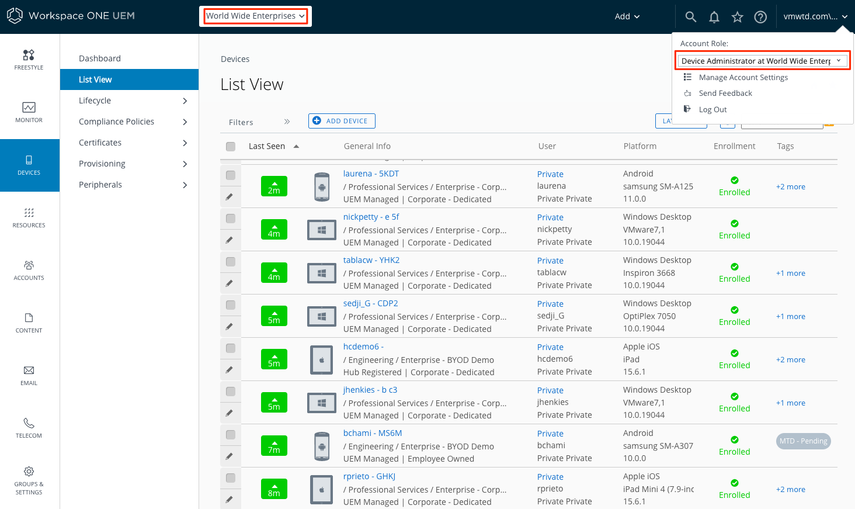 To rapidly find your device in UEM, filter the list by your username.

Initially, after enrollment, Mobile Threat Defense's device state may take up to five (5) minutes to sync with Workspace ONE UEM and tags will soon show up.

Your UEM device record should show MTD has (1) been activated and (2) determined the device to be secure. Accordingly, the device has been tagged with "MTD - Secured" and "MTD - Activated" tags.

Devices that are determined to be secure by MTD will be fully provisioned with device profiles and apps by UEM. Devices that are not secure, are classified as either high, medium, or low risk and will have configured triage measures performed by Workspace ONE.

Drill into your device record. Inside the record you find the device details. 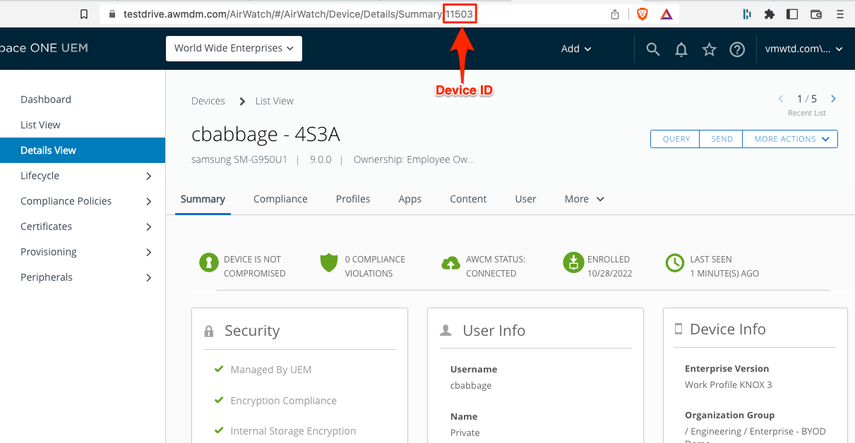 From either the Intelligent Hub (device) or the User Portal (desktop browser), find and launch the Workspace ONE Mobile Threat Defense web app.  Again, click the star to save the app in favorites. 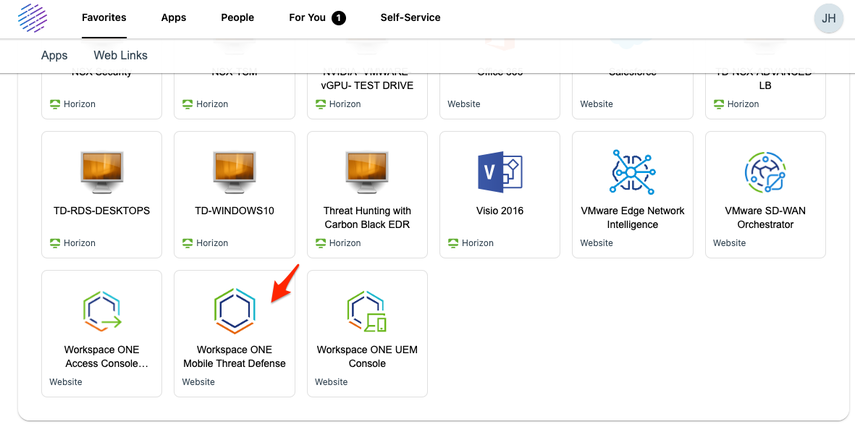 Workspace ONE Access provides SSO into the Mobile Threat Defense console where you will have read only access. 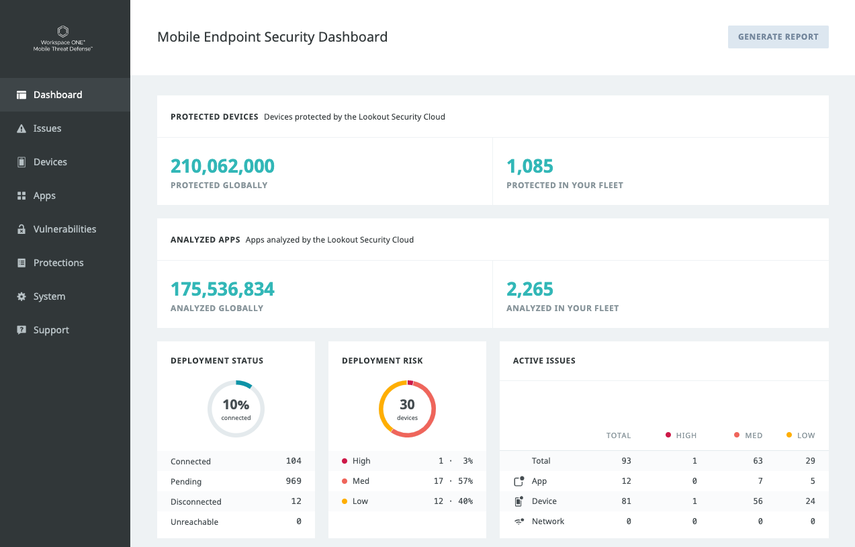 Find your device by filtering the device list by the UEM device ID you made note of earlier.

Due to potential privacy issues in the TestDrive demo environment, the user's email address is not passed from UEM to MTD. In a production environment, email privacy would typically not be configured as it is in TestDrive and you could look up a device by friendly name or email address.

Device status will be listed as either High Risk, Medium Risk, Low Risk, or Secured. This status is passed to UEM through UEM's MTD tagging configuration and, again, deep integration between MTD and UEM.

This Android demo device is identified as secure, just as it is in UEM and the Hub.

Drill into the device to see its details. Note any issues listed for your device. In the case of this demo device, one low risk issue—the passcode not being present during enrollment—was detected and quickly resolved when the passcode was set. 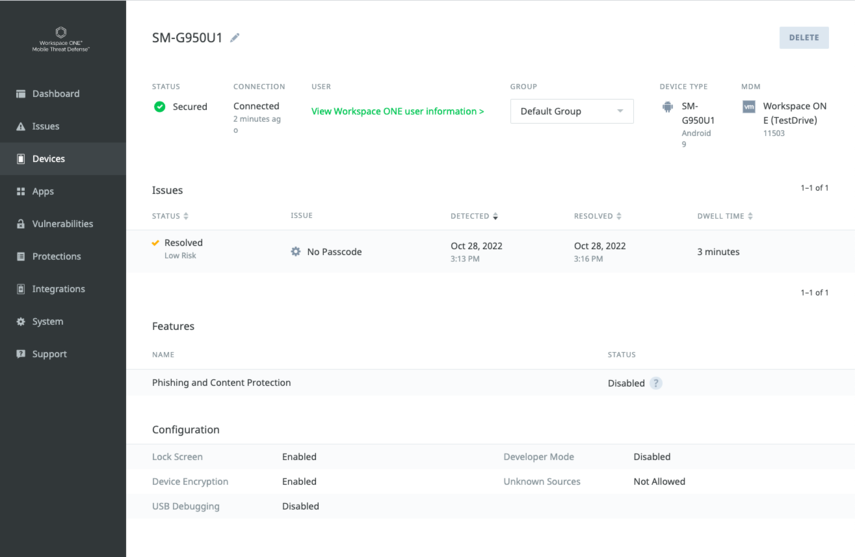 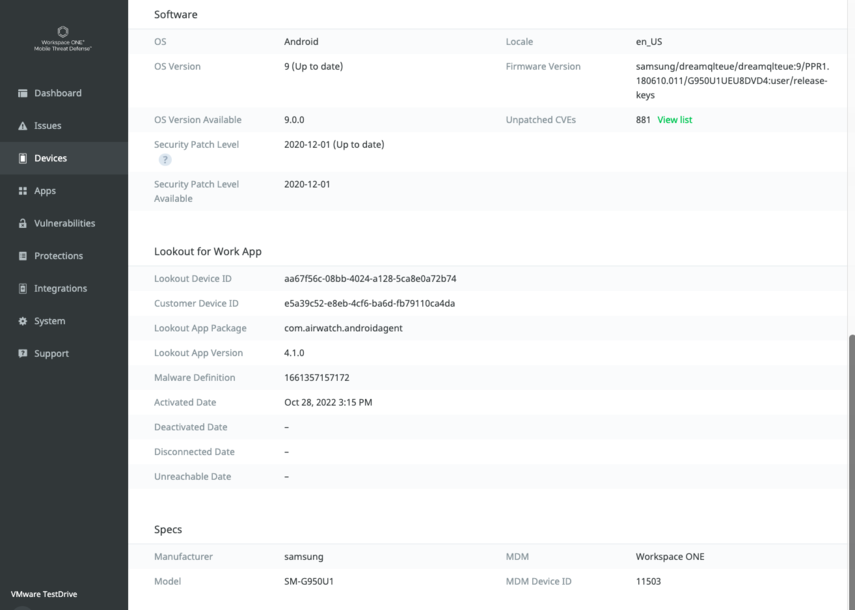 Next, we'll trigger a MTD detection which will initiate device remediations.

Mobile Threat Defense, Workspace ONE UEM, and Workspace ONE Intelligence together provide a myriad of methods to remediate device threats. The measures taken herein are just a sampling.

Below, platform-specific demos are outlined. Each device platform has pre-configured threat triggers so that you can see MTD in action. Triggering time may vary depending on backend system synchronizations, device state, device and network performance, etc.

Launch the MTD console and review it.

Below is the Integrations > Enrollment Management section as configured in TestDrive. 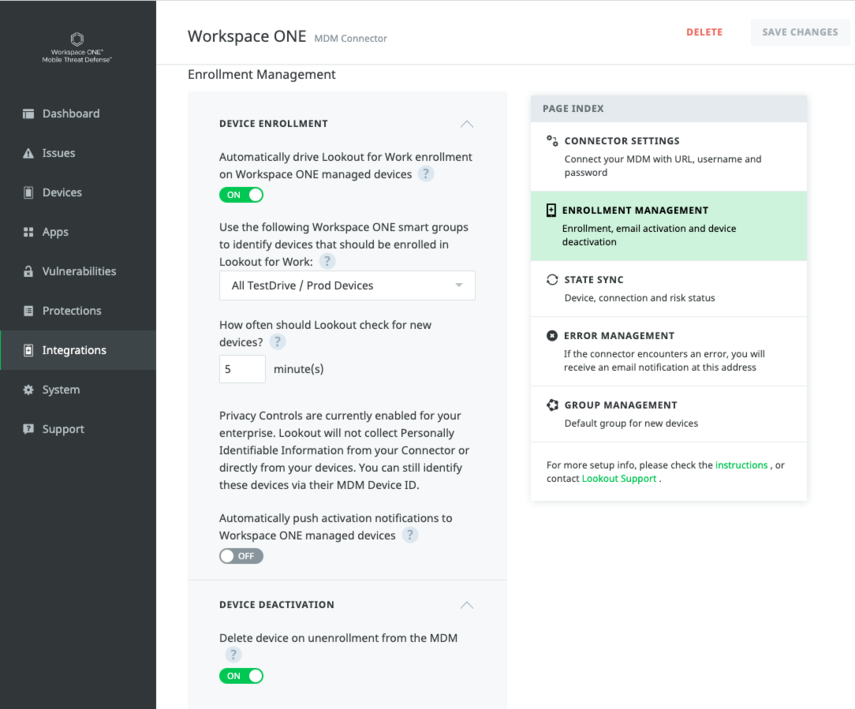 Below is a view of part of the Integrations > State Sync settings as configured in TestDrive. 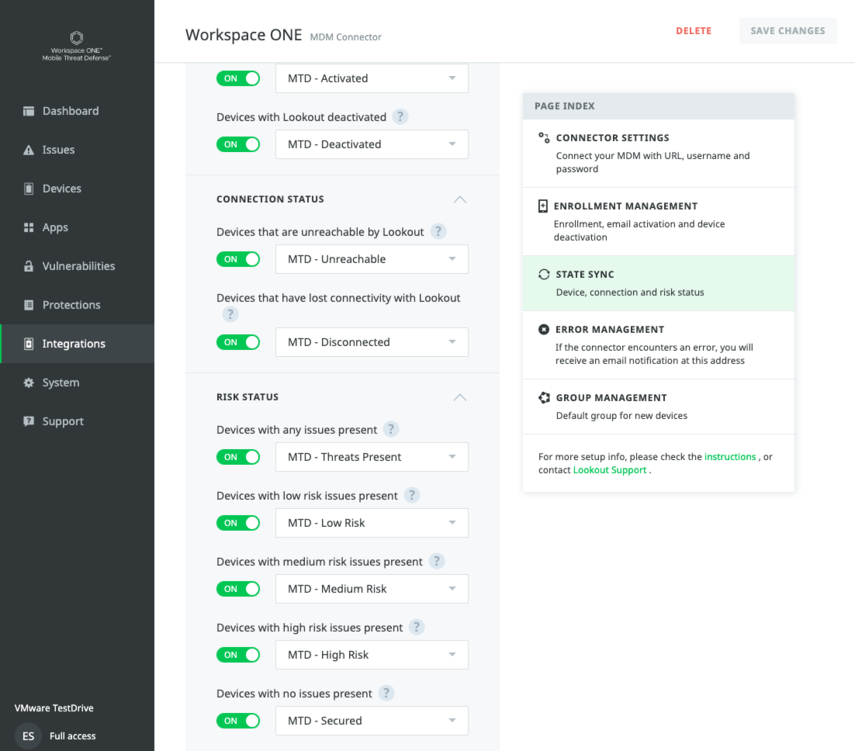 Check out the MTD Tech Zone page for more information including demo videos.